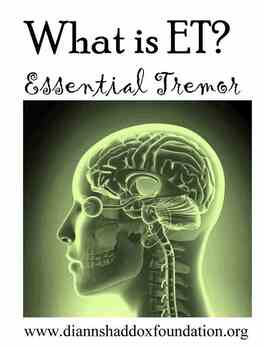 What Are the Symptoms of Essential Tremor?
The primary symptoms associated with essential tremor include:

﻿Essential Tremors﻿ is when you have uncontrolled shaking movements in parts of your body - most commonly the arms and hands. It is more common with increasing age. It tends to occur in families. It is mild in some people but can become severe and disruptive to daily activities in others. There is good treatment available in the form of medication and occasionally surgery.

What is tremor?A tremor is a repetitive movement of a part of the body. It is involuntary. This means that it is generally not controllable and happens without you deciding to move that body part. It is often felt as a trembling or shaking sensation.

Essential Tremor is the result of abnormal communication between certain areas of the brain, including the cerebellum, thalamus, and brain stem.

The cause of ET is unknown, but there is evidence that for some people the disorder is genetic. However, people wit no family history of tremor can also develop ET.

What is essential tremor? Essential tremor is also called familial essential tremor. It is different from physiological tremor described above. It usually starts in the hands and arms. It can sometimes become quite severe so that everyday activities like holding a cup can be difficult. The tremor is usually not there at rest but becomes noticeable when the affected body part is held in a position, or with movement.

The term 'essential' means that there is no associated disease that causes the tremor.

It is not clearly understood how this genetic change leads to essential tremor. However, it is likely that it somehow affects some parts of the brain that are responsible for controlling movement.

What are the symptoms?The only symptom in essential tremor is tremor. If you have other symptoms, then you may have a different condition. (For example, tremor can be a symptom of various conditions such as Parkinson's disease. In these other conditions, tremor is just one of several other symptoms.)

In essential tremor, the tremor usually begins in one arm or hand. Within 1-2 years, the other arm is likely to be affected. Very occasionally, it may also spread to involve the legs. Three in ten people with essential tremor have a tremor of the head. The voice, jaw or face may also be involved.

You may be able to control the tremor to an extent. It may be less noticeable when you are working with the affected body part. For example, when you use your hand the tremor may ease off. It is not present when you are resting or sleeping.

Up to 7 in 10 people with essential tremor find that the tremor reduces after drinking some alcohol.

How is essential tremor diagnosed? ​There is no test to diagnose essential tremor. Your doctor can usually diagnose essential tremor based on your explanation of the tremor and an examination. It is important for the doctor to make sure that there are no other conditions present that are causing tremor. In some cases, this may mean that you need to have some tests to rule out other conditions. For example, blood tests or a brain scan. You may also be referred to a neurologist (a doctor with a special interest and expertise in the brain and nerves).

While the diagnosis of ET remains a visual one, certain brain scans Magnetic Resonance Imaging (MRI) and Computerized Tomography (CT) may be helpful in eliminating any other conditions which also produce tremor as a symptom. For example growths such as tumours or damage to the brain can be seen on certain brain scans. Blood samples may also be taken to rule out thyroid or copper metabolism problems, both of which can cause tremor. DATScan a diagnostic test can distinguish between ET and tremors of Parkinson's disease.

Other conditions that can cause tremor and need to be ruled out include: a side-effect from some prescribed medicines, anxiety, caffeine, some poisons, kidney and liver disease, thyroid disease, Parkinson's disease and other movement disorders.

What is the treatment for essential tremor?Essential tremor cannot be cured. Treatment reduces the severity of the tremor, sometimes greatly. There are various treatments that are used.

No treatment is an option If your tremor is mild, you may not need any treatment.

Medication There are two medicines used initially for essential tremor - propranolol and primidone. These medicines have been shown to ease the tremor in up to 8 in 10 affected people.
When the diagnosis of essential tremor is made, you may be offered one of these medicines. A low dose is usually started at first, and gradually increased until your tremor is eased. If you reach the maximum dose without a satisfactory improvement, then the other medicine can be tried. If that also doesn't work, you can try them together. Other medicines can be tried if these two are not effective. A wide range of medicines have been shown to have some effect on reducing the severity of the tremor.

Surgery If medicine treatment is not effective, and the tremor is severe, then a surgical procedure may be an option. There are two main surgical procedures that may be considered - thalamotomy and thalamic deep brain stimulation. They both involve the thalamus. This is a deep part of the brain that organizes messages travelling between the body and brain.


Intermittent treatment Some people with essential tremor only wish to have treatment for specific times. For example, prior to going to a social engagement or before a particularly important meeting. In these situations a single dose of propranolol or an alcoholic drink may ease the tremor satisfactorily for the occasion.

What is the outlook? Essential tremor is called a progressive disease. This means that it tends to gets worse over time. It does not shorten expected lifespan and does not lead on to any more serious brain disorders. Some people have a mild tremor which does not affect daily life very much. If your tremor is more severe, it may significantly disrupt your ability to carry out normal activities such as drinking from a cup.

However, treatments work well to ease the severity of the tremor in most people with essential tremor.
What is Essential Tremor?

Tremor is an unintentional, somewhat rhythmic, muscle movement involving to-and-fro movements (oscillations) of one or more parts of the body. Essential tremor (previously called benign essential tremor) is the most common form of abnormal tremor. (In some people, tremor is a symptom of a neurological disorder or appears as a side effect of certain drugs.)  Although it may be mild and nonprogressive in some people, in others the tremor is slowly progressive, starting on one side of the body but eventually affecting both sides. Hand tremor is most common but the head, arms, voice, tongue, legs, and trunk may also be involved. Hand tremor may cause problems with purposeful movements such as eating, writing, sewing, or shaving. Head tremor may be seen as a "yes-yes" or "no-no" motion. Essential tremor may be accompanied by mild gait disturbance. Heightened emotion, stress, fever, physical exhaustion, or low blood sugar may trigger tremors or increase their severity. There may be mild degeneration in the certain parts of the cerebellum in persons with essential tremor.  Onset is most common after age 40, although symptoms can appear at any age. Children of a parent who has essential tremor have up to a 50 percent chance of inheriting the condition. Essential tremor is not associated with any known pathology.

Is there any treatment?

There is no definitive cure for essential tremor. Symptomatic drug therapy may include propranolol or other beta blockers and primidone, an anticonvulsant drug. Eliminating tremor "triggers" such as caffeine and other stimulants from the diet is often recommended. Physical and occupational therapy may help to reduce tremor and improve coordination and muscle control for some individuals.  Deep brain stimulation uses a surgically implanted, battery-operated medical device called a neurostimulator to delivery electrical stimulation to targeted areas of the brain that control movement, temporarily blocking the nerve signals that cause tremor.  Other surgical intervention is effective but may have side effects.


﻿What is the prognosis?﻿

Although essential tremor is not life-threatening, it can make it harder to perform daily tasks and is embarrassing to some people. Tremor frequency may decrease as the person ages, but the severity may increase, affecting the person's ability to perform certain tasks or activities of daily living. In many people the tremor may be mild throughout life.


﻿What research is being done?﻿

The National Institute of Neurological Disorders and Stroke, a unit of the National Institutes of Health (NIH) within the U.S. Department of Health and Human Services, is the nation's leading federal funder of research on disorders of the brain and nervous system. The NINDS sponsors research on tremor both at its facilities at the NIH and through grants to medical centers.

Scientists at the NINDS are evaluating the effectiveness of 1-octanol, a substance similar to alcohol but less intoxicating, for treating essential tremor. Results of two previous NIH studies have shown this agent to be promising as a potential new treatment.

Scientists are also studying the effectiveness of botulinum toxin as a treatment for a variety of involuntary movement disorders, including essential tremor of the hand.

About DSF  | DSF Events | Shop DSF | Contact Us | Terms of Use  |  Privacy Policy |​
Diann Shaddox Foundation for Essential Tremors
©2014 and beyond | Diann Shaddox foundation ™| All Rights Reserved.  No part of this website is public domain.
All contributions are tax deductible to the extent allowable by law.